This body of research evolved around two multiyear projects. The first project, funded by the National Science Foundation, explored how U.S.-based multinational corporations, MNCs, manage the environmental and occupational hazards in their overseas facilities in developing countries. Our focus was on the value conflicts between health protection and economic development objectives; and on testing the then widely accepted theory of “pollution havens”, namely that the absence of national environmental regulations is the key factors in choosing the locations of MNCs’ subsidiaries in developing countries. Our detailed case studies in Thailand and India of subsidiaries of three companies – DuPont, Occidental Chemical and Xerox – contradicted the pollution haven theory.

The second project, funded by the International Research and Exchange Board, IREX, and the National Council for Soviet and Eastern European Research, examined the transition of the occupational and environmental protection system in Poland during the post-cold war transition to democracy and market economy. In collaboration with David Angel at Clark University we demonstrated the importance of institutional and cultural continuity in fostering the success of Poland’s transition. 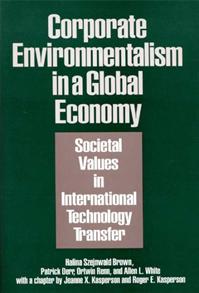