I have written two recent books on congressional primary elections, and edited a third.  The first of these, Getting Primaried:  The Changing Politics of Congressional Primary Challenges, was published by the University of Michigan Press in the spring of 2013.  In the book I argue against the conventional wisdom that primary challenges to incumbent members of Congress are on the rise.  I show that Primary challenges are not becoming more frequent, nor are they more likely to succeed than in the past.  The most successful of today’s primary challengers have, however, been able to nationalize their races, drawing upon national fundraising base of ideologically motivated citizens and internet-based interest groups.

Routledge Publishers has also just published Congressional Primary Elections, a historical account of congressional primaries and the literature on them.  This book is designed for classroom use. 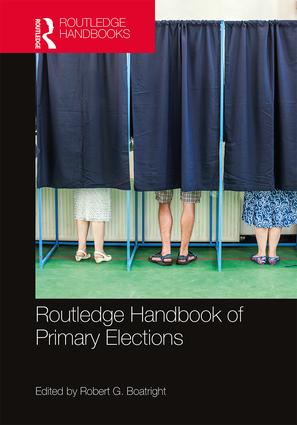 Here is a sampling of the media coverage of Getting Primaried:

Watch my presentation on this material on C-SPAN, October 2009

Watch my presentation on this material at the Brookings Institution, November 2013

An interview with me in the Washington Post, June 2014 (discussing Eric Cantor’s primary defeat)

And another piece for the Washington Post, August 2014, on Republican Senate primaries

Symposium for the Scholars Strategy Network on the future of the Republican Party, July 2014