During Manley’s time in office, a sensational and influential musician emerged who will be remembered by all, his name is Bob Marley. Marley can be best described as a legend in music. His power of influence came from his lyrics that address social and economic injustice. Surprisingly, Marley was not in favor of politics but was seen as a political figure through his politicized lyrics. In turn, it gave the Jamaican people a sense of identity and popularized the Rastafarian religion during the 1970’s. He and his band were called “The Wailers”  who blended traditional Jamaican music with various other forms such as blues with a rhythm into a style known today as Reggae. Reggae quickly became a vehicle for social protests and political messages. Not only did it identify with the Rastafarian’s but mostly people in poverty and unfavorable circumstances which was the majority of the population. An example of this is his song, “War”:

Through his musical influence, he as much as the Jamaican people wanted change for equality and to end their suffering. Though Bob Marley never directly said it, he knew as well as anyone that in order to accomplish the goal in a social movement he must work with politicians that have the power to make such changes. He accomplished this by forming an alliance with Prime Minster Michael Manley in a historical event called, “One Love Peace Concert”

The One Love Peace Concert in 1978 was held in the outdoor National Stadium in Kingston, located at the Jamaican capital. This was the longest and most political reggae concert ever staged, and one of the most remarkable musical events recorded. That day in April was a remarkable day for Jamaican reggae and its greatest celebrity, Prime Minister Michael Manley and opposition leader Edward Seaga who embraced two previously notorious rival gang leaders, Bucky Marshall and Claude Massop. The two political leaders then joined hands with Bob Marley, in an emotional scene that was made all the over Jamaica and the world. This was a crucial period in Jamaican politics. The city’s ghettos had been torn apart by the gun battles between Marshall and Massop’s quasi-political street gangs (Massop supporting Seaga’s Jamaica Labour party, and Marshall favoring Manley’s ruling People’s National party, PNP). Now, the two sides had declared an uneasy truce and the Peace Concert was planned to celebrate the ending of the killings. (Denslow) 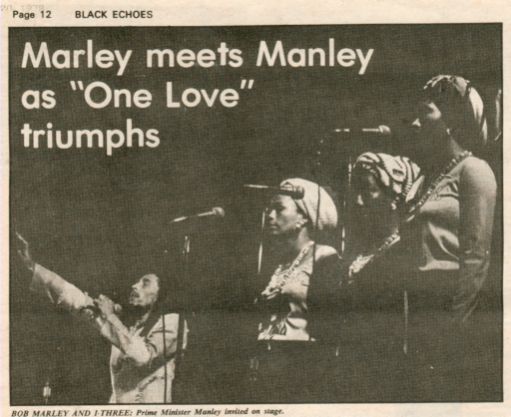 Political leaders from both sides along with Bob Marley were able to come together for an event to bring a change in Jamaica during a rough period. It was an historical event and after Marley’s death in 1981, the two political figures met once again to bring peace. The alliance and unity between Marley, Manley, Rastafarianism and reggae brings together a fine example of the influential and powerful interaction between music and politics.